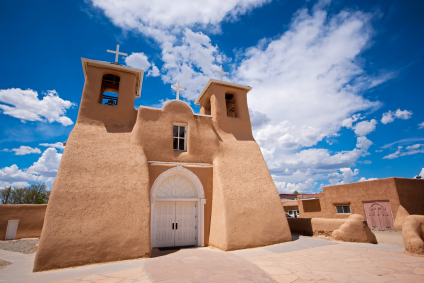 Construction on the church began around 1772 and was completed in 1815 by Franciscan Fathers and its patron is Saint Francis of Assisi. It is made of adobe, similar to many of the other Spanish missions in New Mexico. It was the center of the fortified Ranchos de Taos Plaza for protection against Comanche attackers.

It is located a few miles south of Taos Pueblo and has inspired some of the greatest number of depictions of any building in the United States. It was the subject of several paintings by Georgia O’Keeffe, and photographs by Ansel Adams, Paul Strand, and Ned Scott. Georgia O’Keeffe described it as “one of the most beautiful buildings left in the United States by the early Spaniards.” The Taos Chamber of Commerce states that the building is “one of the most photographed and painted churches in the world”.

It was declared a National Historic Landmark in 1970.[ It is also designated as a World Heritage church.